UFI Filters, the leading filtration and thermal management company, celebrates 40 years of a solid presence in China with an interview where Group CEO Rinaldo Facchini together with Simone Trazzi APAC COO talk about the growth and history of UFI Filters in the Far East.

The interview with Automobile&Parts magazine, one of the most authoritative voices on the Chinese Aftermarket scene tells a story of entrepreneurial vision, the ability to adapt to the fast-changing vehicle market in China and of seeking the most technologically advanced systems.

The history of UFI Filters in China has deep roots: in 1982, Chairman Giorgio Girondi began investing in a market that proved capable of outstripping US vehicle production in as early as 2010. The first plant, which opened in 1996, was the first to be wholly owned and the rapid growth of the market led to the opening of three more industrial filter production sites in the following decade, including the production site in Changchun, Jilin Province.

The UFI Filters Group currently has 6 plants in China, and an agreement has just been signed to build the 7th plant, the 20th worldwide, in Jiaxing, Zhejiang Province. Designed to support and develop the best technologies to support the growing production of New Energy Vehicles (NEVs), the new plant will be the first Green Technology plant in China. There will be 36,000 square metres of space for plant, office and Research & Development department. The plant that will appear in 2023 will be dedicated to producing the most advanced thermal management systems, such as coolers for E-Axle and E-motor, Battery Chillers, Coolant Battery Heaters and Liquid Cooled Condensers.

Rinaldo Facchini, CEO of the UFI Filters Group comments, “The commitment we made in 1996 has never failed or wavered. It has always been strong and growing. We will invest further to build a new production site in Jiaxing, Zhejiang and in new projects for green technologies.”

Simone Trazzi – COO APAC of the UFI Filters Group adds, “This investment, in the 7th industrial site in China, will support the development of products for NEVs – vehicles fuelled by new forms of energy – which represent the future of transport for both passengers and commercial vehicles, in the world’s most important and dynamic automotive market. We already have four industrial sites, employing 1,600 people. The new plant will cover over 36,000 square metres of production and warehouse space, with the possibility of further expansion to another 30,000 square metres.”

The interview also talks about how the UFI Filters Group has published its first Sustainability Report, based on three fundamental pillars: Environment, Social and Governance, with a special focus on People, as you can read in the introductory letter by Chairman Giorgio Girondi. One further push to live up to its mantra: “Filtering Technology For Our Planet”. 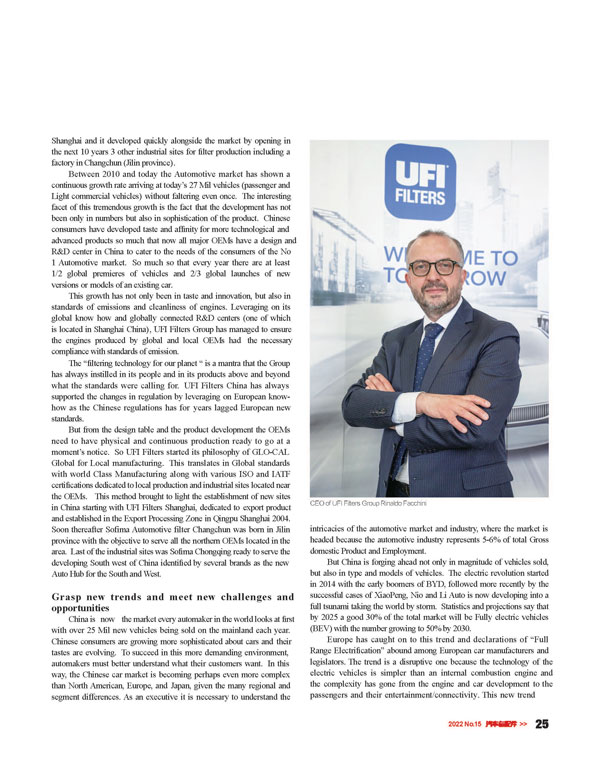 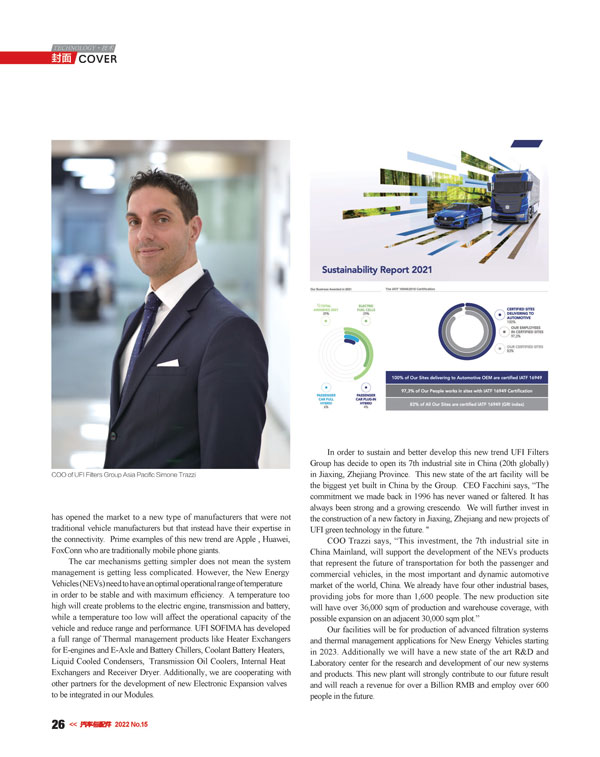 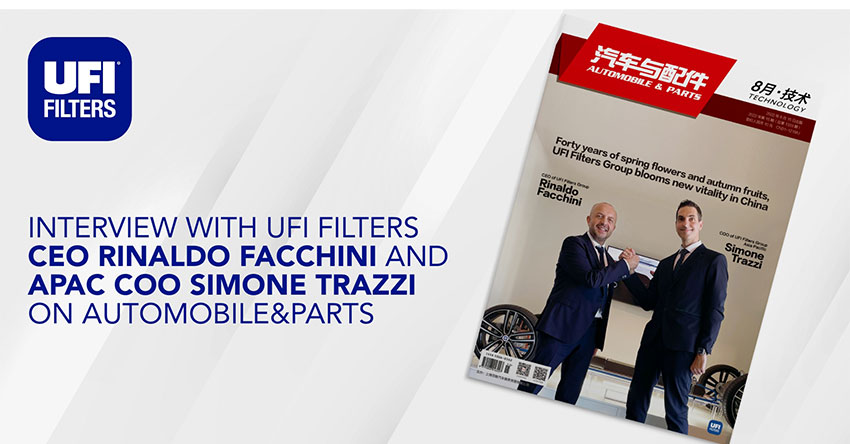 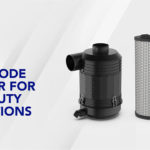 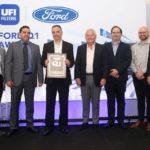 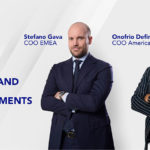 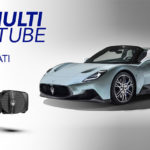